Many people do not realize we have a sister company, EastWave Building Company, in Poland.  If you visit our offices you will see that we not only fly the U.S. Flag, but also Poland’s; as well as displaying project photos from across the ocean.  These are exciting times for EastWave as they provide services on two very interesting projects.

EastWave’s involvement during pre-construction was instrumental in the Team achieving a BREEAM EXCELENT CLASSIFICATION for building design.  This qualifies the POLNA OFFICE BUIDLING as the highest BREEAM classification of any project currently on the market in Poland under the 2013 revisions.   Scheduled to begin in September 2015, this 10,000m2 new building and 6,000m2 historical renovation has already achieved great accolades.

BREEAM (Building Research Establishment Environmental Assessment Method) is considered by many to be the globe’s foremost environmental assessment method and rating system for buildings.  BREEAM sets the standard for best practice in sustainable building design, construction and operation and has become one of the most comprehensive and widely recognized measures of a building’s environmental performance. It encourages designers, clients and others to think about low carbon and low impact design, minimizing the energy demands created by a building before considering energy efficiency and low carbon technologies.  Often compared to LEED in the U.S., BREEAM is the world’s longest established and most widely used method of environmental assessment.

The second, BUDDHAS HALL WARSZAWA, is a 1,300m2 project, combining both renovation and new construction.  EastWave, acting as the Construction Manager, is overseeing subcontractor work 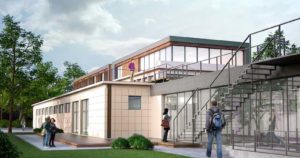 packages to include:  new structural work, mechanical, electrical, site and interior finishes.  This facility, which will be the largest Buddhist Center in Warsaw, is to be used for Education, Meditation, Dining and Sleeping for the Diamond Way Buddhists in Warsaw.  It will function as a meeting point for all Polish and central European Buddhists, with a goal of making Buddhism accessible to the public in Polish, as something understandable rather than exotic.

Diamond Way Buddhism is a network of lay meditation centers within the Karma Kagyu lineage of Tibetan Buddhism, founded by Lama Ole Nydahl and under the spiritual authority of H.H. 17th Karmapa Trinley Thaye Dorje.